Last week I went to a lecture by Professor Duncan Stroik on Franciscan architecture. I had to leave early (downside of living in Jersey), but it was interesting. He talked about the meaning of building a church for the poor in an architectural sense, how the churches of the Franciscan order—an order rooted in poverty—are often very intricate and ornate, reflecting the transcendent beauty of God. He made the important point that a stark, bare, “modern”-looking church is often very expensive to build, and it represents not an architecture for the poor but an impoverished architecture.

At St. Francis of Assisi Church in NYC, people off the street can come inside and experience beautiful art and mosaics, towering columns, and a centrally located ornate gold tabernacle. In keeping with the Franciscan spirit, the doors are open for everyone to be welcomed in and experience its beauty. 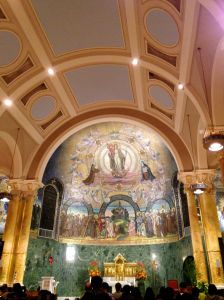 What if this church, just down the street from the noise and grit of Penn Station, looked instead like some of the stark metal and concrete churches I see profiled and celebrated by secular critics in current architectural publications? How would the experience be different for the hungry and poor who enter, for the weary travelers and commuters? Would they, as modern architects speculate, be intrigued with the play of light and shadow against a blank concrete wall and understand it as “symbolic of the paschal mystery”? Would you? Would they appreciate its coldness and emptiness as a nod to their own poverty? Would they feel welcomed? Would they want to come back?

Does the old woman who lights a candle and kneels before a statue of Mary think the decor heavy-handed and unoriginal? Does she wish the pastor had commissioned something more interesting, like a “perspectivally exaggerated box” or an altar skewed off axis to “highlight its importance”? (Both real elements of modern churches I’ve seen featured in architectural writing.)

A church contains art, but it is more than art. The building itself is not simply a canvas for the architect’s expression, and it is not a “statement”; it is a living, working building used by hundreds of people, and it is a home for Christ Himself. A church for the people is not esoteric; the meaning behind the architecture should not be a trick or a secret of the architect that the congregation is supposed to guess at. Good architecture has layered meaning that reveals more and more the deeper you look, but it does not hide its meaning—or its beauty—to the average man looking upon it for the first time.

I often have trouble articulating my thoughts on liturgical architecture and music. I have ideas about what is beautiful and what isn’t, but liturgy is so complex and nuanced, and I want to avoid giving the false impression that all churches must look “traditional” in a very narrow interpretation of the word or that there isn’t room for new ways of expressing the beauty of God. 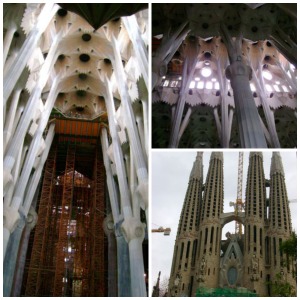 [surely there is room for Gaudí]

All of these mediums—architecture, music, words—they are not universally good; rather, they are powerful, and they can be used to express all kinds of ideas. Rather than celebrating expression for its own sake, we need to pay more attention to what ideas each work represents and how it affects our cultural consciousness. At the same time, we cannot limit expression to a narrow sphere; there is room for a wide range of the human experience to be given a voice. It is up to us to discern which works we experience for ourselves and then, on another level, which we give a place of honor.

In designing a church, the goal is not to show off new technology or to be original for the sake of being original. Rather, the goal is to create a space that facilitates the contemplation of what is good and noble, to draw us upward.

[In a similar vein, reading a book is only enriching insofar as it allows us to contemplate truth and beauty. This standard excludes both overly didactic allegories that are so concerned with preaching what is right that they are neither good nor honest, as well as plotless “novels” that act as vehicles for indulging in gossip, violence, and lust. Both these forms attempt to use the book to serve some other purpose and elevate some other thing—propaganda, money, pleasure—above the art itself. Reading is a window toward exploring new worlds. It is possible to enter through that window, crawl into a dark corner, and stay crouched among the cobwebs. We should seek the light in whatever work we are reading, and it can shine through in surprising places. More than the ability to read and process text, I value an inclination to seek goodness and truth, wherever it may be found.]

The liturgy is not a place for idle experimentation. The church structure itself is not meant to represent the architect’s personal reinterpretation of sacred ideas. Rather, it is a representation of the larger Church, of what unites us all as the Body of Christ, and it should reflect both the tradition that connects us and the transcendent beauty of God.

We can’t lose sight of the fact that a Catholic church, as the place where we celebrate the Eucharist, is the place where we welcome God into the world. It ought to reflect the beauty of Bethlehem: poverty and simplicity of spirit joined with the warmth and wonder of the star above, the humble presence of the shepherds alongside the gold, frankincense, and myrrh of the magi. We should prepare our very best to welcome the Lord, the most beautiful places we can create with the humble resources we are given. Beauty can be expressed in many different forms—in buildings, in music, in people—and there is an opportunity for a wide variety of architectural form within these parameters. There is not a simple script for exactly what a beautiful church should look like, nor should there be.

The sacrifice of the Mass does not depend on the church structure or the music or the language. It is the Eucharist and the people who share in it that matter, and whatever the church structure looks like, it is made sacred by the presence of the Eucharist alone. But good liturgy is a nice plus, an extra pull toward Heaven for us lowly humans who ache for a glimpse of the glory we are reaching toward.

A powerfully moving and beautiful Mass can take place in a gym or a run-down church or a meeting room in the airport, but not necessarily because of its setting—rather, despite it. And that’s true of any Mass anywhere: however bad the homily or the music or the lighting, we can take comfort in the fact that the event of the Mass is still the sacred meeting of Heaven and earth. It is usually easier for us to see this reality with the aid of beautiful liturgy pointing us in the right direction, but it is always true, no matter the circumstances.

I don’t have answers to all these questions, but I think it’s something worth talking about, especially for those involved in design or in the conversation around architectural criticism. It’s the same struggle that all of us will face in one form or another: how to recognize and foster beauty in the midst of a messy world.