Whenever I go to Starbucks or other such establishments that write down my name, the most common spelling I get is “Aaron.” Somehow it still surprises me how many people don’t realize that “Aaron” is a boy’s name and “Erin” is a girl’s name. Maybe it’s only obvious to me because it’s my own name?

But more than the many, many “Aaron” cups I receive, I am most entertained by the more creative spellings. Here are a few:

Sometimes the barista starts to misspell my name but then corrects it: 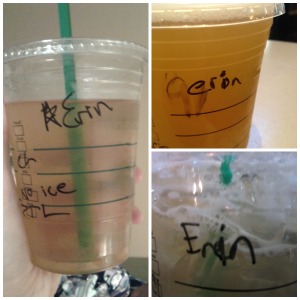 Once, the barista started writing my name but then paused to ask, “Wait, Ariel or Erin?” When I said “Erin,” she scribbled out what she’d already written and started over:

[Well, I do bear a resemblance to a certain mermaid]

Two of the most ridiculous spellings I’ve ever gotten didn’t come from Starbucks. In second place, from Rubio’s:

And my personal favorite—the cashier started writing “A”s, paused in confusion, and then just scribbled out an ending: 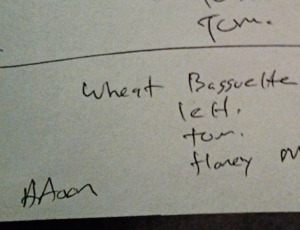 I know that the baristas might just be messing with me sometimes, and maybe it’s working—now I look forward to seeing what new spelling they’ll come up with next. I hardly ever get cups that say “Erin,” but isn’t it more entertaining to get cups that say “Arran” and “Aroon” instead?

2 thoughts on “Creative spellings of Erin”