I was born in the suburbs of Philadelphia, and most of my family lives there. It’s always been one of my favorite places in the world. While I was growing up we moved around a lot, but we always came back and stayed at my aunt’s house during the summer.

I lived there for a few months in 2012, just before I moved to California. I had an internship in the city, and I loved walking around and exploring. (I also really loved the gluten-free bakery options…many of my adventures were planned around a stop at Sweet Freedom or Main Line Bakery.)

The period of time when I was living in Philadelphia was just after I was diagnosed with my food allergies, so I was navigating how to figure out my new diet and find places to eat. It was nice to be able to do that amidst an already-familiar setting, and to make new discoveries of gluten-free restaurants in neighborhoods I thought I already knew everything about.

My friends visited for one last weekend before I moved out west, and it was great to be able to show them around and introduce them to a city that holds so much meaning for me. 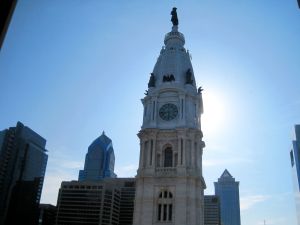 We stayed in a hotel over the weekend, and our hotel room number was #2012. I thought it was a funny coincidence to begin with (since this took place in the year 2012), and then I walked down the hallway, past 2008 and 2009, all the way to 2012, but stopping before 2013, and it was like an out-of-body experience: the Hallway of Time. I almost wouldn’t have been surprised if each of those doors had opened to reveal past and future versions of myself. But the only door that opened was 2012, and there I saw a clear picture of my present: the city of Philadelphia spread out before me and a box of gluten-free muffins to share with my friends. I nearly burst with gratitude.

Philadelphia will always be home to me, no matter where I am living. There are so many good memories stored there that come swirling back whenever I visit.