Lately I have been inspired by the example of others who are earnestly seeking God in their own lives, and it has challenged me to examine my own spiritual life. For those of us who long ago made a decision to follow God and who practice religion in our daily lives, it is easy to fall into the trap of thinking that we already have everything figured out, to plateau in our practice of the faith and fall into a sort of complacency. But if we have in fact integrated prayer into our lives, every so often we will feel a sort of tug, a sense of discomfort with our current state, that pulls us deeper into the mysteries of God’s love and challenges us to give more of ourselves.

Sr. Theresa Aletheia Noble once described faith as a forest, in which everyone starts deep in the woods and sets out on a journey toward a lake. Some people stick to the path and get there in a straightforward way; others take a more roundabout route and get lost amid the trees. Some people head off in the opposite direction. Some take a map while others insist on finding their own way to the shore. Some start out headed in the right direction but get distracted and delayed along the way. Some wander aimlessly for a while until they get thirsty and then start seeking out water. But ultimately, what matters is not the route they take to get there; what matters is whether they end up at the water—the Living Water of God—by the end of the day.

We are all on a journey: we are all returning to God. God loves you wherever you are on this journey. It will do you no good to compare yourself with people who are in different places than you—do not be discouraged by those who appear further ahead than you are, and do not become prideful of the fact that many others trail behind you. God does not really care about your location; He cares about your velocity. Are you earnestly seeking Him, or are you dragging your feet? Within each of us, there is a movement of the heart toward God (or away from God, as the case may be). What matters most is whether we attend to this movement, whether we yearn and seek more of Him, whether we foster an earnest pursuit of the Source of All Goodness.

Maybe you’re lost in the middle of the forest, and you don’t know which direction to go next. How do you know where to turn? You need to start walking—somewhere, anywhere. Maybe you’ll find a dead end and have to turn around, but at least then you’ll know more than if you had just sat down on the ground and given up. In order to figure out whether you’re moving in the right direction, you first have to be moving. Even a negative velocity is better than a velocity of zero. 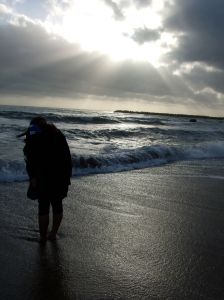 To take the forest analogy a step further, there is a shift in the spiritual life once we have reached the Living Water of God. First, we bask in His refreshing truth and drink in His goodness and mercy. And then He asks us something we may not have been expecting: to swim. He invites us further into His depths; He offers us flotation devices or even boats according to our need, but He asks us to journey further onward with Him. We may have reached the water, but that doesn’t mean our journey is ended—in fact, it’s just beginning. As we start to travel through the water, we learn that it isn’t a lake at all; it is a vast ocean, one so deep, so incomparable, so breathtakingly beautiful and immense, that we could never see it all in a lifetime. God invites us to a life of seeking Him, even as we are surrounded by Him. We never reach a point where we can rest in our journey, not in this lifetime. 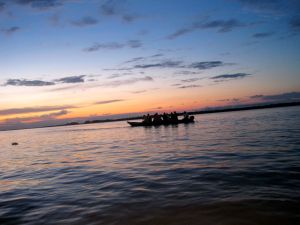 Converts to the faith often become spurred on in a whirlwind of zeal, and in their fervor they pass by many of the faithful who have been practicing much longer than they have. I sometimes feel myself becoming swept up in their wake, and I am so grateful for their example of steadfast velocity, moving passionately in pursuit of God and stirring the hearts of others whom they pass along the way. Those who are just discovering the beauty of God for the first time are able to renew the hearts of many who have become jaded through the years.

What would have happened if St. Frances Xavier Cabrini had been content to stand with her toes in the water, patting herself on the back for making it to the shore when so many others stayed inland? In her case, she embraced a devout faith in childhood, and she was later uniquely called to sail abroad, beyond the comfort zone of the European society she had been raised in, serving those in need in the United States. Once there, she founded sixty-seven institutions—schools, hospitals, and orphanages—and her legacy is immeasurable. Without her courageous witness, the Church in America would not be what it is today. And believe it or not, she actually had a fear or drowning as a child that caused her to stay away from the water—but she bravely overcame that fear to cross the Atlantic twenty-three times.

And St. Therese was once discouraged by the fact that she didn’t seem to possess the same qualities of the great saints—she felt small and weak by comparison. She didn’t think she could catch up with those ahead of her on the journey. But if she had let that keep her from pursuing God, she would have missed her calling—to become a great saint and even a Doctor of the Church, even in her weaknesses. She became so great precisely because she learned how to embrace her weaknesses and accept them as gifts from God, and she has inspired countless people with her childlike wisdom.

St. Teresa of Avila also learned, through trial and error, that it is fruitless to attempt to keep God at arm’s length. There’s a reason I picked one of her quotes to go on the top of this page:

The truth is that if we stop moving toward God, we will start drifting away from Him. We need to keep seeking Him further and further, knowing Him more and more. He quenches our thirst and yet at the same time increases our capacity to thirst; He meets our pressing needs but then uncovers other needs that we had hidden from Him, maybe even from ourselves. He invites us with every step to present all our needs to Him, all our wounds to be healed, all the things we’d rather ignore. He isn’t content with healing us halfway; He wants all of us.

God is love, and there is no such thing as stagnation or complacency when it comes to love. There is always more to be uncovered, further depths to discover and fall deeper and deeper in love with. There are difficulties through which to persevere; there are mundane moments in which we demonstrate our love and faithfulness even when we feel no grand, sweeping emotions to motivate us. And there are new joys yet to be experienced, beauty we can scarcely imagine from where we now stand. We are never finished, and He is never finished with us.

Happy Feast of St. Teresa, patron of this blog!

4 thoughts on “Velocity of the Soul”