On our second day in Mexico, we woke up early and met downstairs for breakfast. We were scheduled to have morning Mass on the grounds of the Basilica of Guadalupe, so we headed out early on the bus and drove to the outskirts of Mexico City. As we entered the grounds and walked past the open doors of the new Basilica, I could see Juan Diego’s tilma from a distance and excitedly pointed it out to my friends. We didn’t have time to stop and look, though, and we couldn’t make out any details of the image from that distance. We kept walking toward the Templo del Pocito, a smaller church where we would be having Mass.

I played flute for this Mass while Kelly sang. The music was simple, with just the two of us leading, but it seemed to work out well. The acoustics of the church were pretty good, so the sound of my flute was able to carry just fine without a microphone. We played some Marian hymns—seemed the appropriate place for that. 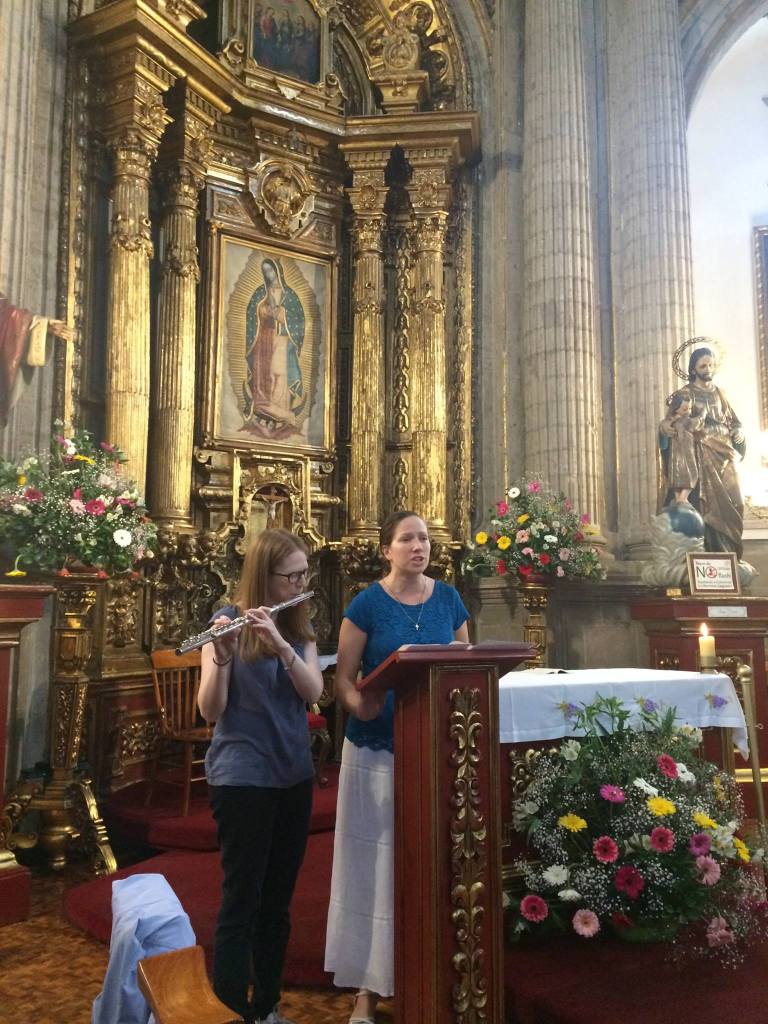 After Mass we met up with our tour guide for the day, a seminarian who was a scholar of Guadalupe. He was a great guide and gave really detailed information on the history of everything we saw. First we walked inside the Antigua Parroquia de Indios, which is the original shrine church built on this site, constructed to fulfill Mary’s request to Juan Diego. Juan Diego himself lived there during his last years, and he died there. This church was also where the image was placed on display for the natives who would come to revere it in the early years after the apparitions, when mass conversions were taking place.

We passed by the Chapel of Oaths, where people make promises to Our Lady.

We walked out into a grassy area with statues and fountains and started up the path to the top of Tepeyac hill.

There was a great view of Mexico City from the top of the hill.

This is the first apparition site, and a chapel was constructed at the top of the hill on the exact location. We got to walk around inside the church, where there were murals depicting the story of the apparitions.

While we were on top of the hill, the sun came out and I had to break out the sunscreen pretty quickly! Luckily, I avoided sunburn on this trip. 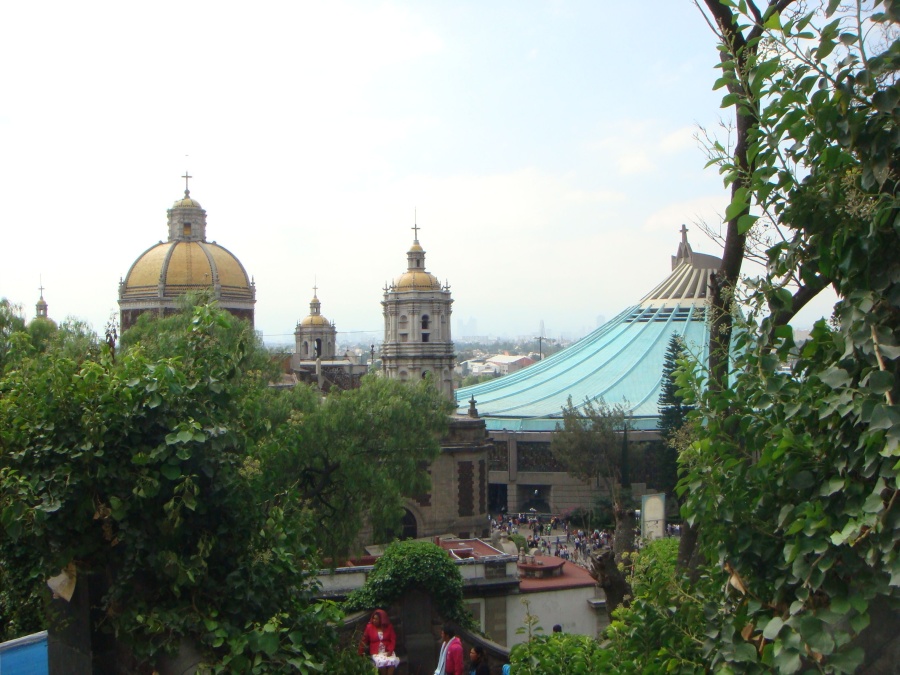 After spending a while on the hill, we made our way back down. We passed by the baptistery, where we saw a long line of families waiting to have their children baptized (it was a Sunday). There were lots of infants and toddler girls dressed up for their baptisms in frilly white dresses, and we actually saw one girl dressed in an Elsa dress and tiara! 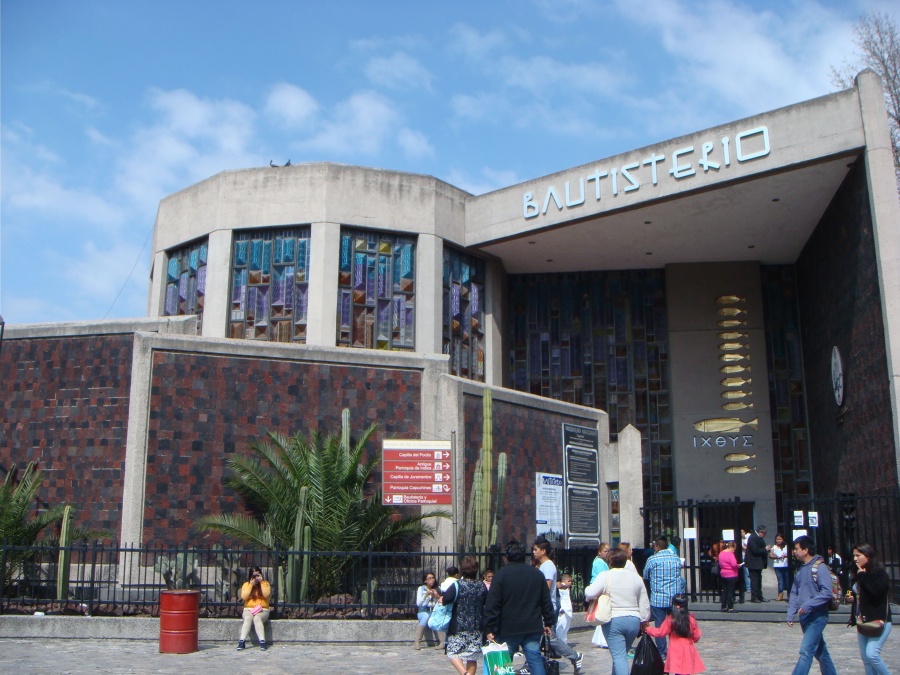 We saw several statues and images of St. John Paul II here and around Mexico City—he is beloved for canonizing Juan Diego and for making visits to the Basilica of Guadalupe.

We walked into the Basilica for a few minutes and saw the image of Our Lady—not up close, but from a distance. We’d be coming back later to see her again.

We walked a ways down the road for lunch—we had reservations at a place called Monte Cristo that turned out to be really fancy. We had a choice of entrée between chipotle chicken and pork with crickets, and I was quite surprised at how many in our group chose the cricket pork. I was much less adventurous and stuck with the chicken (which was delicious, and absolutely the right decision). Not only were there crickets on top of the pork; the sauce had ground crickets, too. That goes far beyond my culinary limits.

Next we walked back and had a holy hour inside the Old Basilica, which gave us a chance to slow down and reflect before going to see the image of Our Lady.

Then we headed over to the new Basilica to see the image up close. There was a long line of people waiting to get on the conveyor belt that takes you past the image. They use the conveyor belt as a way to keep the crowds moving and to make sure everyone has a chance to see the image, and while it’s a little weird, I think the system works really well. It was a little surreal to see the image in person, and I think all of us felt like it went by too quickly. We went back through the line a few times to get a chance to see Our Lady in all her beautiful detail again. But we didn’t have a ton of time to linger that day, but we would be returning two days later and would be able to see the image again then. 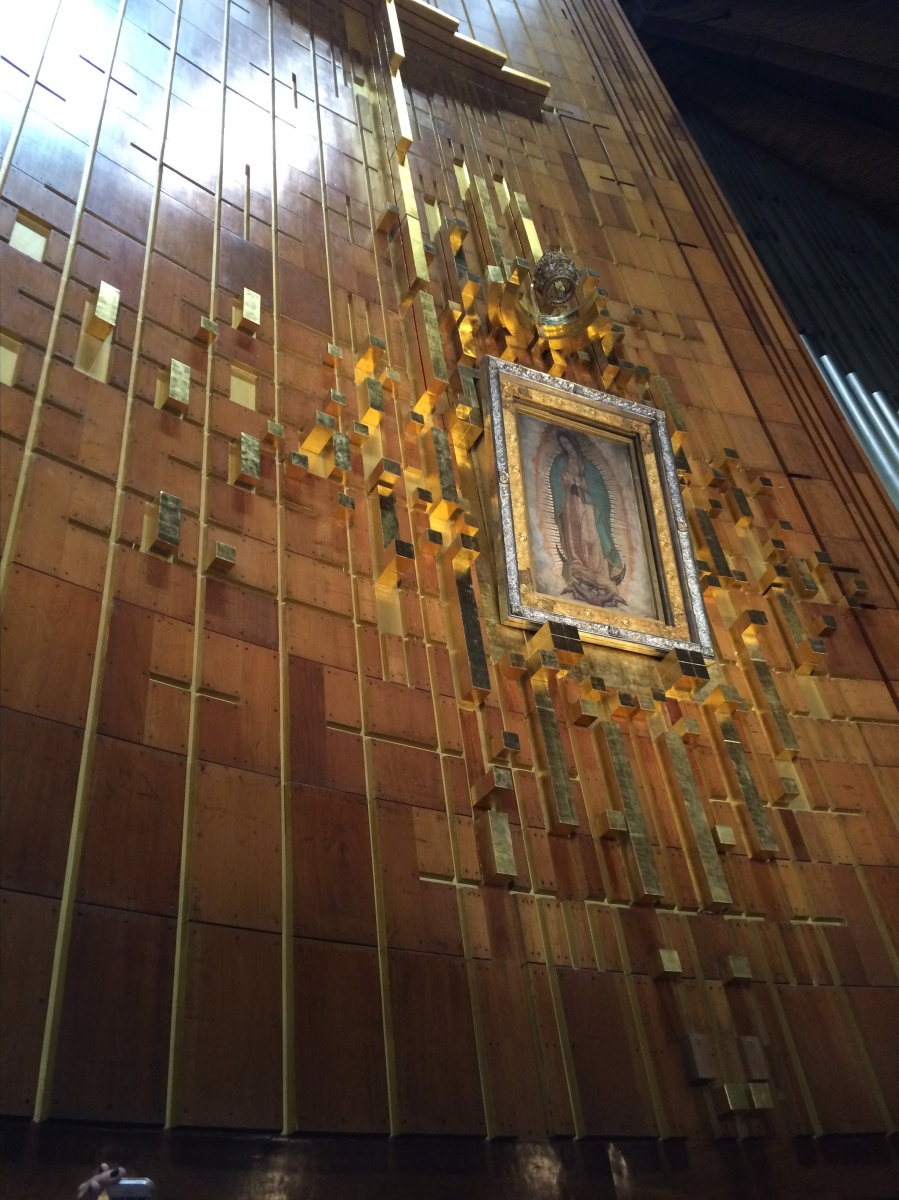 After spending some time with Our Lady, we got back on the bus and went back to the hotel. A group of us got dinner at a simple Mexican place down the street—they had incredible flan.

Kelly and I practiced the next day’s music before bed, and then we all turned in—we had to get up early the next day for a long bus trip!