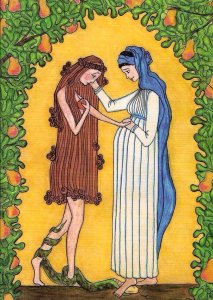 When Adam was created in original justice and grace, it was his nature to be ruler over all that was created on the earth, and so all the lesser creatures rendered him obedience. When he sinned and transgressed against God he was rejected by his inferiors. The elements and the rest of the creatures rebelled against him. Therefore, if Mary most holy was preserved from this original poison, in justice she would be owed all the privileges due her because of being conceived in grace. Therefore, as a matter of original justice all creatures would be subject to her, because she did not participate in that sin which caused their rebellion against Adam and all of his children….
Divine Omnipotence is to be credited not only with restoring human nature, by redeeming it, but by making use of human nature, by predestining and preserving in his eternal mind a pure creature adorned with sanctifying grace from the first instant of her being. Through her the image and likeness of God was restored, perfecting the rest of his work and restoring it to its rightful order.
—Sor Juana

The Church Fathers consistently referred to Mary as the New Eve, which is to say, the one who reversed the momentum started by the mother of the human race. The Ave of the angel was seen as the reversal of Eva. While Eve grasped at divinity, Mary said “Let it be done unto me.”
—Fr. Robert Barron 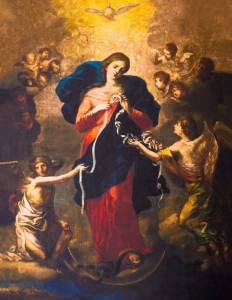 We feel the sting of Adam’s sin, the weight of sin and suffering in the world, each and every day. But Mary beckons to us as a hopeful sign of what awaits if only we, too, say yes to God. She has opened a path for us that reverses the sin of Adam and rescues us from all our mistakes, our many faults and failings. None of us would have made a fitting tabernacle for God to enter the world, but Mary, pure of heart, received Him with love and ushered Him in. Where every other human soul rebelled against Him and distrusted His plan, she was presented with a wild and incredible proposal—to conceive through the Holy Spirit and bear the Son of God—and gave her fiat. And now, thanks to the graces and Sacraments that her Son instituted on earth—cleansing us of our sins in Baptism and Confession, offering Himself to us in the Eucharist—we, too, receive Him into our very bodies in Communion. Unworthy though we are, we are redeemed by His sacrifice, and in gratitude we follow our Mother’s example as living tabernacles.

As we prepare to welcome the Christ child, let us remember the one who first carried Him on earth. May we strive always to imitate her purity and confident trust, preparing our hearts to welcome our Savior and bring Him forth into the world.