Jesus went up the mountain and summoned those whom he wanted
and they came to him.
He appointed Twelve, whom he also named Apostles,
that they might be with him
and he might send them forth to preach
and to have authority to drive out demons:
He appointed the Twelve:
Simon, whom he named Peter;
James, son of Zebedee,
and John the brother of James, whom he named Boanerges,
that is, sons of thunder;
Andrew, Philip, Bartholomew,
Matthew, Thomas, James the son of Alphaeus;
Thaddeus, Simon the Cananean,
and Judas Iscariot who betrayed him. 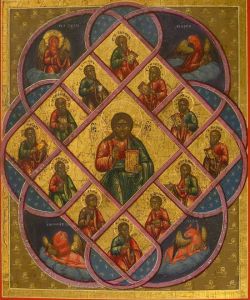 The fact that Jesus chose twelve apostles is a sign of His fulfillment of the promise made to Israel. In calling twelve apostles, Jesus alludes to His role as the Messiah who will gather the twelve tribes of Israel. And in renaming Peter, James, and John, He calls back to Old Testament figures who were given new names after being irrevocably changed by powerful encounters with God. Only God can alter our very identity with His presence and transform us into new people.

Just as He called forth the apostles, Jesus calls each one of us by name. Every day He summons us, asking us to serve in ways big and small. And every day we have the opportunity to respond, to go up the mountain to greet Him. He gives us a new name, to signify that our very identity now lies in being His chosen one, His beloved.

And if we are truly His beloved, then we can go wherever He sends us without fear. We have nothing to prove; we have only to allow Him to love us. When our hearts are open to receive Him and our ears are listening for His voice, He will work within us, using our hands and feet to do His work.

Most are called to live day in and day out in a somewhat hidden way. Know that these are the moments when you are called to grow in virtue, do small hidden things well, and enjoy the quiet rhythm of ordinary living. But we should also be aware of the possibility that God may, from time to time, call us to step out of our comfort zone and act in a more public way. The key is to be ready and attentive to His will and plan for you. Be ready and willing to let Him use you in a new way if it be His divine will.

—“The Calling of a Hidden Life”