“Now, Master, you may let your servant go
in peace, according to your word,
for my eyes have seen your salvation,
which you prepared in the sight of all the peoples:
a light for revelation to the Gentiles,
and glory for your people Israel.”
The child’s father and mother were amazed at what was said about him;
and Simeon blessed them and said to Mary his mother,
“Behold, this child is destined
for the fall and rise of many in Israel,
and to be a sign that will be contradicted
—and you yourself a sword will pierce—
so that the thoughts of many hearts may be revealed.”
—Luke 2:29–35 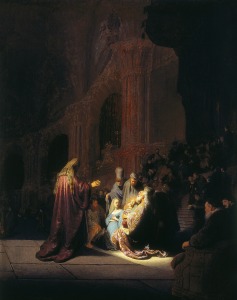 Today at Candlemas, we remember the Presentation of the Lord, when Mary and Joseph brought the baby Jesus to the Temple in Jerusalem. In accordance with Jewish law, they consecrated Him to God, and in doing so they offered to God what was already His: His own Son.

The Temple was not only God’s dwelling place on Earth; it also held the altar of sacrifice. And it was here that Mary and Joseph would hear Simeon’s words of prophecy—both recognizing Jesus as the fulfillment of God’s covenant and indicating the sacrifice and suffering He would endure. The two roles were forever intertwined. Even in His infancy, the little Emmanuel—God with us, the very personification of the Temple—bore the mark of the Cross. He was both Messiah and Lamb of God, to be slaughtered in atonement for our sins. His glory is inextricably linked with His humiliation and death. This is the paradox inherent in the Christian life: that the Cross, an instrument of torture and death, would be exalted; that our deliverance would come through anguish.

Let us pray that we may have the eyes of Simeon, to recognize the divine in the everyday, and even in suffering. As children of God, we are destined for the glory of Heaven, but we, too, are not spared from the Cross. We will be asked to make a sacrifice of ourselves each and every day, out of love for God and one another. As our joy and sorrow coexist, we are united with Mary, who looked upon her Son that day with both pride and grief, and with her Son, who walks besides us always.