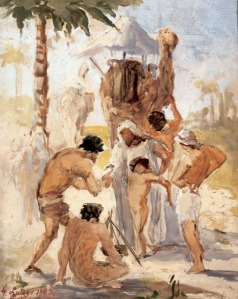 Today’s first reading recounts the story of Joseph being sold into slavery by his brothers. Jealous of the attention he was getting from their father and annoyed by his prideful behavior, they acted out of anger and got rid of him. However, it becomes clear in Scripture that Joseph was not only his father’s chosen favorite; he was also the chosen one of God, to fulfill a mission in Egypt.

When Joseph’s brothers came face to face with him again many years later, and when they realized that Joseph was the one who had the power to save their lives from famine, surely they feared that he would remember their crimes against him and be unwilling to help. But Joseph was moved to tears to see them once again, and he forgave them immediately for all they had done:

“Come closer to me,” Joseph told his brothers. When they had done so, he said: “I am your brother Joseph, whom you sold into Egypt.
But now do not be distressed, and do not be angry with yourselves for having sold me here. It was really for the sake of saving lives that God sent me here ahead of you.
The famine has been in the land for two years now, and for five more years cultivation will yield no harvest.
God, therefore, sent me on ahead of you to ensure for you a remnant on earth and to save your lives in an extraordinary deliverance.
So it was not really you but God who had me come here; and he has made me a father to Pharaoh, lord of all his household, and ruler over the whole land of Egypt.

Joseph was indeed chosen, but his chosenness did not have the significance he first imagined as his father’s favorite child. He was chosen not because of his own merit, but simply because he was in a position to serve others. Over the course of his journey in Egypt, he became aware of his own faults and gained a sense of humility. The people that God calls are not always the best or holiest individuals, but they are given an opportunity to do something for God. God had a plan for Joseph and used him in spite of his flaws. Joseph’s pride faded when he realized that he was undeserving of the honors he coveted. By the end of the story, his brothers’ jealousy faded as well—in particular Judah’s—for we can see that they no longer hate the fact that Joseph is ruler over them but willingly bow down to him. Joseph and his brothers all reach a peaceful resolution by acknowledging their own weakness and unworthiness of power. Joseph, however, is a successful ruler because he realizes not only that he is unworthy of power but also that he has been chosen regardless, and he can fulfill this task with God’s help. It is humility that allows him to accept his role as ruler despite his weakness, for he is acting in obedience to God and simply accepting what he is given instead of seeking power out of sheer avarice.

Each of us is given a unique role to fill, and in many situations we are asked to play a supporting role. It is up to us to embrace the role we are given and fulfill it to the best of our ability, rather than being jealous of those who have roles of greater importance or shirk the responsibilities of our calling. It would be foolish to think that we are better than anyone else, even if it appears that we are in a more influential position; some are called to quieter, hidden lives and live them meaningfully.

Joseph was chosen to rule over his brothers and save the lives of many, but that doesn’t mean he was a better person than his brothers were. The Jewish people were indeed God’s chosen people, but that does not mean they were better than the Gentiles. Joseph was chosen to be the conduit for God to carry out His plan, and the Jewish people were the conduit through which God Himself entered the world in the person of Jesus Christ.

It is no surprise that Joseph and Judah emerged as the strongest clans in Israel, when one considers the fact that these two brothers were the ones who most fully accepted and embraced the roles given them by God. They became the men that God created them to be instead of fighting against their lot in life or demanding more. In everything, they acted with humility.