When the magi had departed, behold,
the angel of the Lord appeared to Joseph in a dream and said,
“Rise, take the child and his mother, flee to Egypt,
and stay there until I tell you.
Herod is going to search for the child to destroy him.”
Joseph rose and took the child and his mother by night
and departed for Egypt.
He stayed there until the death of Herod,
that what the Lord had said through the prophet might be fulfilled,
Out of Egypt I called my son.

When Herod realized that he had been deceived by the magi,
he became furious.
He ordered the massacre of all the boys in Bethlehem and its vicinity
two years old and under,
in accordance with the time he had ascertained from the magi.
Then was fulfilled what had been said through Jeremiah the prophet:

A voice was heard in Ramah,
sobbing and loud lamentation;
Rachel weeping for her children,
and she would not be consoled,
since they were no more. 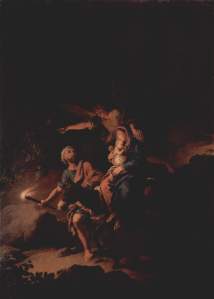 As Joseph and Mary anticipated Jesus’s arrival, surely they had some idea that they should expect the unexpected when it came to parenting the Son of God. After all, they had already received one giant surprise and had chosen to trust in God’s plan. Still, I don’t think they could have guessed this next curveball in their journey. After traveling to Bethlehem and delivering the child Jesus in a stable, Mary and Joseph were now asked to leave behind everything and everyone they knew, fleeing the country to protect their newborn son from being hunted by King Herod.

It is a testament to his unshakeable trust in God that Joseph responded to the angel’s warning without hesitation, picking up and leaving for Egypt immediately. After all, it was a big sacrifice to make for a message that had arrived in a dream. How did he know that this was truly God’s will for him and not some crazy manifestation of his own subconscious? Only by being so familiar with God’s voice through daily prayer was Joseph able to discern with clarity that this was a message he should heed. And he did so without wringing his hands wondering where they would stay, how they would get by in a foreign land, and why such senseless bloodshed must ensue at the hands of Herod. He dropped everything, including his own plans, to follow God’s call.

God gives grace for the situation, not for the imagination. The only way that Joseph and Mary were able to follow God so resolutely was by continually seeking His will in the present moment. They didn’t become distracted by worries and plans for the future; surely they had hopes and fears of what might lay ahead, but they placed it all in God’s hands and trusted that He would direct their steps.

Herod, on the other hand, was driven entirely by his own wild fears and self-serving plans. Filled with fear and insecurity upon hearing of the birth of this newborn king, he lashed out with merciless brutality and ordered the massacre of innocent children. But even this act of violence did not achieve its intended end, for the Holy Family had already escaped into Egypt.

Herod’s inflated ego numbed his conscience and skewed his perception of justice; he was willing to sacrifice whatever was necessary to preserve his own power, even innocent lives. Herod grasped for control when he perceived a threat to his power, but God was always in control of the situation. The newborn king would die at the appointed time and place, not through Herod’s feverish display of power and cruelty.

We are not in control, and that is a marvelous thing. Let us embrace the unknown path that lies ahead, knowing that we have a good and loving God who will lead us every step of the way. When unexpected situations arrive, may we trust that God will provide us the grace we need in the moment. And may we always be willing to speak up for the innocent and vulnerable, who are so often trampled upon and exploited by those in power.