Linking up with Kelly.

You’ve probably heard that we had a blizzard here in New York this week. As a result, I had a half day of work on Monday and a snow day on Tuesday. Not bad. It’s been quite a while since I’ve had a snow day…the last time involved a lot more actual snow, but I’ll take it. 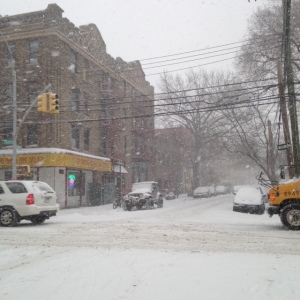 January is usually a good month for reading, at least for me. I remember saying years ago that the best way to tell if something is wrong with me is if I’m not currently reading something; an underlying strain of worry, stress, or sickness first manifests itself by making me lose focus in my current book. I think this still holds true, though there have definitely been a few long stretches since then when the weight of sickness and of being overscheduled have made it hard for me to read at all, or at least to read at the breakneck pace I used to (although I always have a long list of books I hope to delve into). But January, January always holds a static, empty pause that inevitably becomes filled with books. So I’ve been doing some more reading—some Jane Austen, some E.B. White, some T.S. Eliot, some St. Francis de Sales. Mostly it’s just nice, after the excitement of December (and of moving) has settled, to let myself get lost in a book and not worry about what else I have to get done.

To be honest, January is not generally my favorite month. It’s usually stale and dreary, and frequently in my life it’s brought unexpected difficulties and bad news. But I think that Januaries, still and empty as they are, are necessary for my general health and sanity. January is when all the dust and glitter that coated my December life are washed away, and I can see things for what they really are. I can see the holes that need to be patched up, and I can see the stark beauty of the good things that remain when all the frills have been stripped away. There is comfort in routine and monotony; there is rest amid the quiet and cold.

Yesterday I met up with a friend at the Astor Place Starbucks. When she mentioned that she’d never been to the Strand, I decided we needed to fix that, so we started walking up Broadway toward my favorite bookstore. After we’d walked a few blocks, I realized that my Metrocard was not in my pocket. It had likely fallen out as I was walking…and given that it was nighttime and we were walking on Broadway, I figured it was lost forever. I had about a week left on it and I knew I could get it refunded, but since you can only do that twice in a calendar year, it didn’t bode well if I was already losing my Metrocard in January. (Losing it in November? Fine, no problem. January? When I’d only gone two months since the last time I’d lost one? Would be cause for concern.)

So anyway, my friend insisted that we retrace our steps a few blocks to see if we spotted it on the sidewalk. It wasn’t even the normal, bright yellow Metrocard, so I didn’t think it would be easy to see amidst the sidewalk slush—it’s a weird, special edition, dark brown version for the 50th anniversary of the Verrazano-Narrows Bridge. But! When we got all the way back to the Astor Place Starbucks, she spotted it next to a pile of snow. And it still works! Disaster averted. I am eternally grateful.

The Notre Dame men’s basketball team beat Duke this week! It was an awesome finish. I’m very happy to see us holding our own in the top ten right now…let’s just hope we can keep it up come March.

This week Disneyland announced their plans for the park’s 60th anniversary this summer…and now I really, really want to go back to Disneyland later this year. A new, Walt-themed World of Color?! And new fireworks with Main Street projections and music from Richard Sherman, and a nighttime parade, and sparkly castle and sparkly Carthay and refurbished rides? And you can meet Oswald the Rabbit now? Yes. Yes, yes, yes.

I frequently watch YouTube videos of World of Color and Remember…Dreams Come True. Not quite the same as being there, of course, but they always put me in a better mood. Although I think my favorite fireworks music will forever be Believe…There’s Magic in the Stars, which was the show that was running the first time I visited Disneyland. Actually, wait—that’s my favorite for a castle fireworks show. My favorite overall fireworks music is (of course) IllumiNations: Reflections of Earth, from Epcot.

I have a CD soundtrack of IllumiNations and Tapestry of Dreams, which played in heavy rotation in my car during my last year of college. I used to chauffeur my friends to studio every day, and they always commented on how weird and trippy Tapestry of Dreams is. But I LOVE it. My favorite part is when all the children from around the world are saying what their dreams are, speaking in their native languages, and then the American kid chimes in and says, “I dream of learning to speak a different language”—a.k.a. “I dream of understanding everything they just said.”

At the end of that year, I was driving everybody to studio on the day of our thesis presentations, which were kind of a big deal. We had barely slept, we were all dressed up, and it was pretty surreal that this day—the culmination of our architectural education—had actually arrived. We were buzzing with nervous energy, and, as per usual, I had the IllumiNations soundtrack playing. In the backseat, one of my friends started yelling out architectural terminology to the tune of the music, perfectly aligned with the syncopated rhythm, in the attempt to get himself psyched up for his presentation. And we could not stop laughing. Now I can’t listen to IllumiNations without smiling and thinking of the architectural thesis version. But seriously, it’s an awesome song, regardless of whether you’re a Disney fanatic like me.

So I have only ever had two wisdom teeth, just the upper ones. One of them broke through my gum four years ago and needed an emergency extraction. Because it came in on its own, the extraction was easier and less painful than a usual wisdom tooth surgery, so the dentist recommended that I wait for the other one to come in the same way before removing it, unless some other issue came up. It’s been slowly moving its way down over the past four years, but it was never terribly painful and never broke through the gum as far as the other one did. Until this week.

Last time, I had a little less than a week between when the pain started and when the tooth needed to be removed. This time, the pain started on Wednesday. My dental coverage begins on Sunday. It’s like the tooth knew. While I am grateful to my wisdom tooth for waiting until I (almost) have dental coverage before piercing through my gum, I wish it would have waited just a little bit longer so I could schedule an extraction, since I still don’t have my insurance paperwork yet. In the meantime, I am eating mostly oatmeal and using liberal amounts of Orajel. Wish me luck.