On day 4 of our trip, we spent the morning touring Mexico City. We started at the Plaza de la Constitución and the grounds of the Cathedral.

We had Mass at a small chapel on the Cathedral grounds. Afterwards, we toured the main Cathedral. 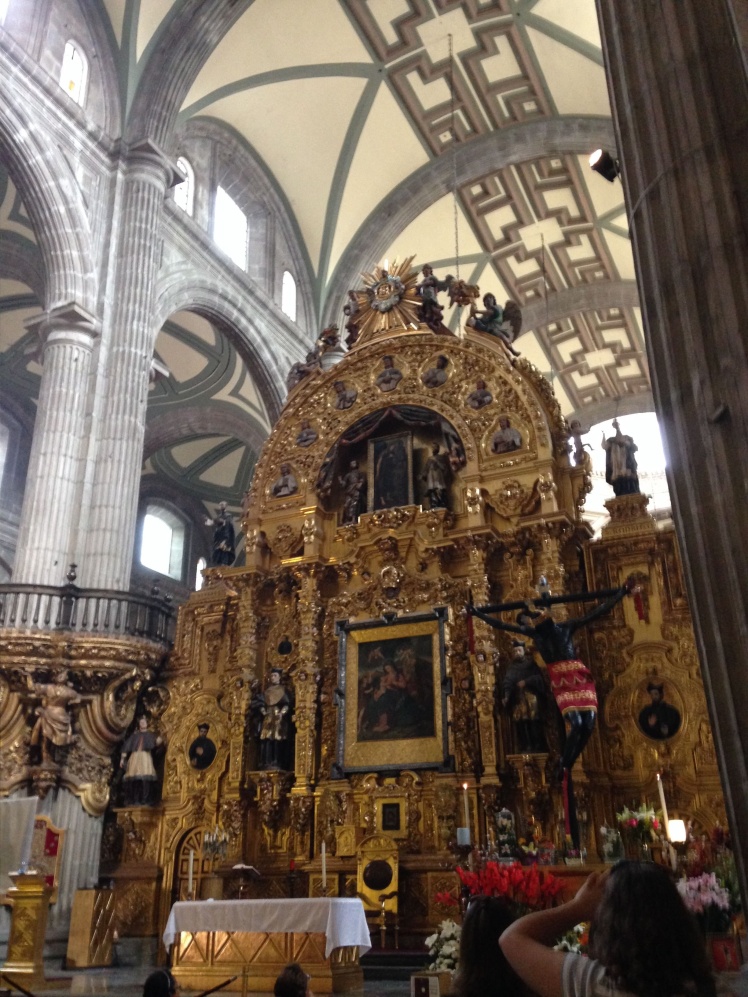 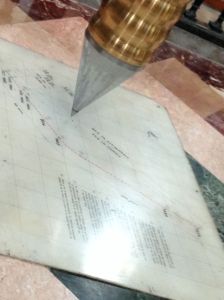 Then we walked nearby to see the ruins of Tenochtitlán, the Aztec city.

We explored the plaza for a bit. 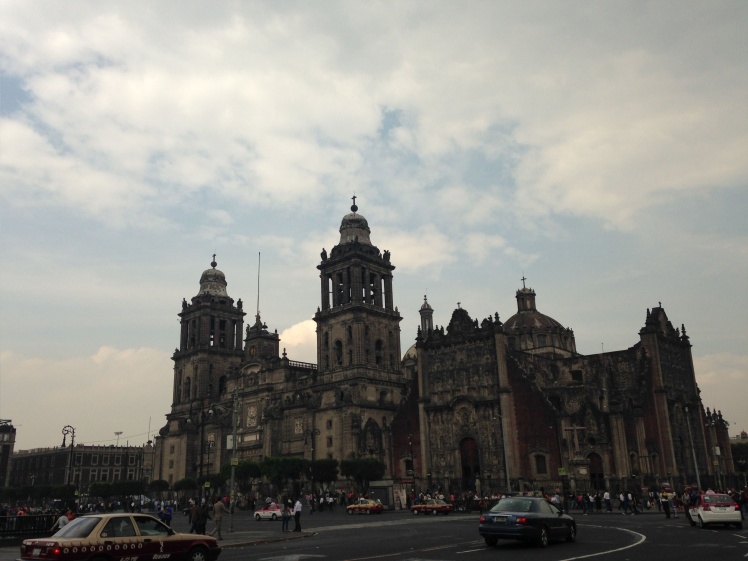 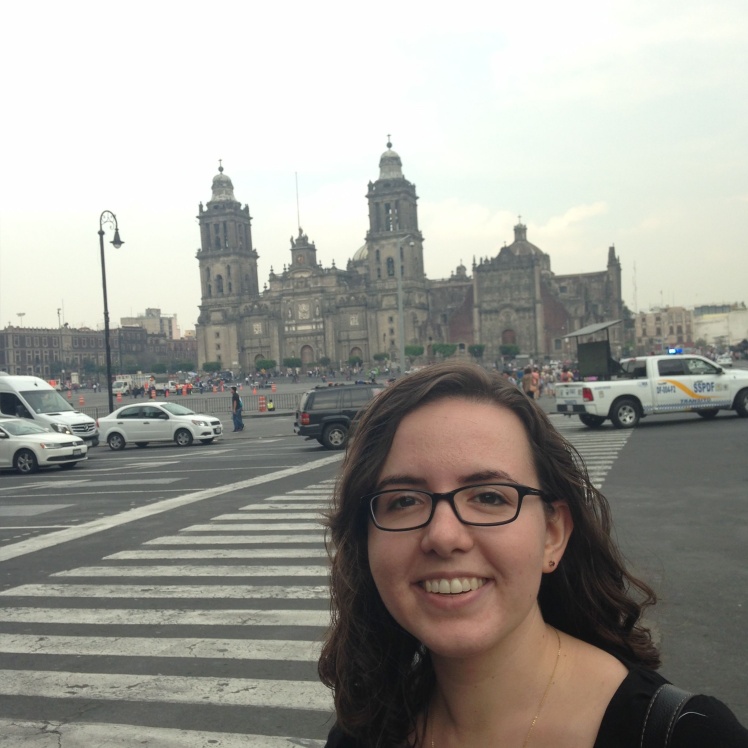 After spending some time walking around the plaza, we boarded the buses again and drove out to the countryside, near the Aztec pyramids of Teotihuacan.

We stopped at a restaurant for lunch.

After lunch, we were dropped off at a sort of tourist trap where they sold souvenirs and showed how they make traditional Mexican goods using an agave plant. The agave plant is very useful—its leaves can be used to make pens and paper, its fibers can be used for weaving, and its sap can be fermented to make pulque, an alcoholic drink. We were all given samples of pulque to drink, and then several samples of tequila (I think their sales method was to liquor us up first, then send us to the gift shop—it didn’t really work, though; we didn’t linger very long because we wanted to get to the pyramids). It was definitely an unusual experience to drink tequila shots with friars!

Next, we headed to the pyramids of Teotihuacan. When we arrived, we were running behind schedule, so we only had fifteen minutes to climb one of them. Some people were intrepid enough to run up and down the pyramid in that time; I climbed part of the way up and took in the view. 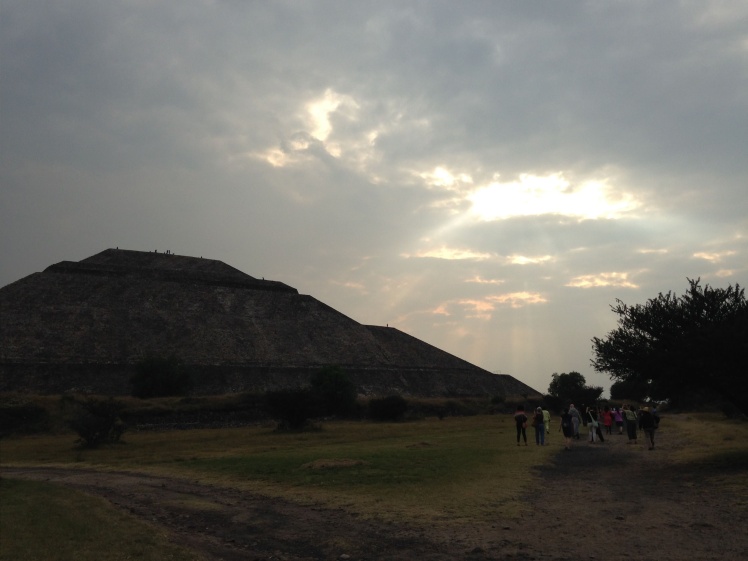 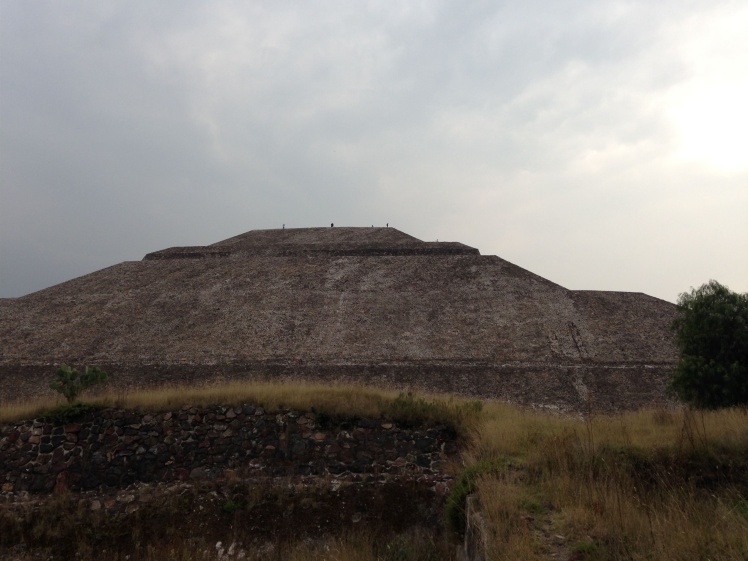 It was crazy to be in this spot and realize that human sacrifices used to be performed here. What a blessing that today, this is a tourist destination instead!

We got back on the bus and returned to the city. During the bus ride, we watched a documentary on Our Lady of Guadalupe that I would highly recommend: Guadalupe: The Miracle and the Message.

We returned to the Basilica of Guadalupe and spent some more time with the image of Our Lady. We brought lists of prayer intentions and left them in the box of intentions as we approached the image.

It was much less crowded visiting on a Tuesday compared to when we first visited on Sunday. There were multiple conveyor belts open, going in different directions, so you could stay in front of the image and just move back and forth instead of walking all the way around to get back in line. They still needed the conveyor belts to keep people moving, though, because everyone would have wanted to camp out right in front of the image if they could!

It was really peaceful to just stay a while to look at the image, going back and forth on the conveyor belts. I talked with a Mexican couple who asked me to take their picture; they didn’t speak any English so I got to practice my Spanish.

We also stopped by the Basilica gift shop for souvenirs, most of which were replicas of the image. My friends chipped in to have a Mass said at the Basilica for me in honor of my birthday, which was really sweet! Masses are said there every hour, and there are long lines of people waiting to request Masses to be said for specific intentions.

It was bittersweet to leave the Basilica for the last time, but we’d had a really nice evening praying there. This was our last night in Mexico, and to cap it off we went out for a fancy dinner at the Capitol Grille.

Then we returned to the hotel to pack—I hung out in Liz and Jennifer’s room for a little while before turning in for the night.