(Warning: very long post about basketball ahead. If you’re not a fan of college basketball, proceed at your own risk.)

March Madness is a big deal in my family. Both my parents went to basketball schools (Villanova for my mom, St. Joe’s for my dad), and while I didn’t like watching football growing up, I watched a lot of basketball. When I was in high school, my extended family would fill out paper brackets and fax them to our house, and my sister and I would lay out all the brackets on the kitchen table to tally up wins and losses. It was a very organized system with highlighters and red and green pens. After each set of games, we’d calculate the standings (we had three categories: wins, upsets, and picking the overall winner) and send an update email to the family. My sister and I both have fond memories of this—we were reminiscing about it this year. These days everything is already calculated for us online, and our scoring system has been slightly adjusted in accordance with the website’s standards. There are advantages to not having to score the brackets ourselves, but I kind of miss those highlighter days. And whereas before everyone would wait for our email to see how they were doing in the pool, now they can check an app and know in seconds if their bracket’s been busted. But even with these newfangled technologies, our bracket traditions continue. This year, our schedules aligned during the first weekend of March Madness so that my sister and I both went home for the weekend, which was nice—we were able to watch basketball games together as a family. None of my friends are as into it as we are ;)

Also, Notre Dame was playing the first round of games in Brooklyn, and I got tickets to see their first game against Michigan! It was so much fun. We were losing during the first half, but we had a great comeback win.

I also got to see Stephen F. Austin’s amazing upset of West Virginia, and the SFA star, Thomas Walkup (who bears quite a resemblance to the lumberjack mascot), was walking around our section during the Notre Dame game.

Probably the best surprise of that Friday night was before we even got to the game. When we were walking toward the subway to head to Brooklyn for the game, we stumbled upon the Notre Dame band! It was awesome! They were there with the cheerleaders, playing cadences and school songs, waiting for the team and coach to come outside. I said hi to the cheerleading coach, and she remembered me from the NCAA tournament trip to Spokane we made in 2007, back when I was a freshman in the pep band. My dad and I hung around and waited to watch Coach Brey and the players walk by and load the bus, as the band played the fight song. It was so great to have the chance to spontaneously do ND cheers in the middle of Manhattan (and I couldn’t help but do a few piccolo dances by myself!).

Notre Dame ended up having a great run to the Elite Eight, and the cherry on top of this tournament was Villanova’s incredible win on Monday night. My mom and aunt both went to Villanova, and my family is full of diehard Villanova fans.

I filled out two brackets this year, and one of them had Villanova winning it all—I thought it was a dream bracket full of wishful predictions that wouldn’t come true, but it ended up being the winning bracket in my pool! My sister, on the other hand, usually picks Villanova to win it all every year, but this year she decided she was fed up with them disappointing her and picked Kansas instead! Tough luck. (My mom joked that she’s not allowed to pick Villanova anymore, because when she doesn’t they win ;)).

Because I know I’ll probably forget some of these things by next year and will want to reminisce, here are some highlights of the best March Madness of my life thus far:

—Michigan State, the team that many people favored to win it all, lost in the first round to Middle Tennessee. It wasn’t even a close game! Everyone was shocked, and pretty much everyone’s bracket was busted right off the bat. I picked MSU to win in one of my brackets, the one I entered in my friend pool. When they lost, I figured this would do me in, but since nobody predicted the MSU loss, it actually didn’t affect my bracket too badly. This is actually not the first time that the team I picked to win it all lost in the first round—I picked 2-seed Missouri in 2012, but that ended up destroying my bracket a lot worse than the MSU loss did this year. Not only was the MSU loss to Middle Tennessee a huge upset, but Michigan State was actually favored to win the tournament by ESPN, and more money was bet on them in Vegas than on any other team. Nearly 1/4 of bracket entries online picked Michigan State!

—Notre Dame pulled off three incredible wins in nailbiter games. First was the comeback against Michigan.

Then came the last-second tip-in from freshman Rex Pflueger in the game against Cinderella team Stephen F. Austin, where we squeaked by with a win.

And then our last-minute rush against Wisconsin to retake the lead before the buzzer!

All three games were stressful to watch, but all worth it in the end! We finished with a loss to North Carolina, and while it was hard to see us lose, I was so, so proud of this team. We were the only team to appear in the Elite Eight in both 2015 and 2016!

—11-seed Gonzaga defied the odds to make the Sweet Sixteen, pulling off two upsets, including a blowout win against 3-seed Utah. They almost hadn’t made it into the tournament at all—which would have broken a 17-year streak of tournament appearances (now 18 years)—but they won the WCC conference championship and then went on to upset Seton Hall and Utah in the Big Dance.

—Thomas Walkup: Before this March, nobody knew his name, but when he scored 33 points in the Stephen F. Austin–West Virginia game, everyone was talking about him. He gave Notre Dame a run for their money, too! 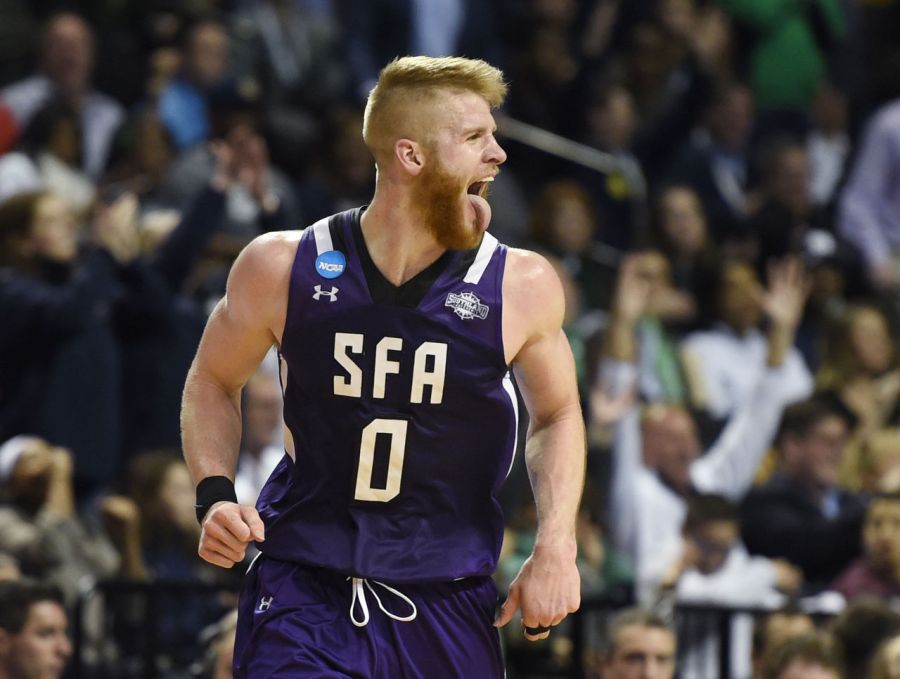 —Baylor’s Taurean Prince gave a perfect answer to a postgame interview question on how Yale was able to get more rebounds than Baylor (and oh yeah, Yale won an NCAA tournament game for the first time in…ever.).

—Pep band members displayed a full range of emotion (including a dance-off between Providence and UNC bands). 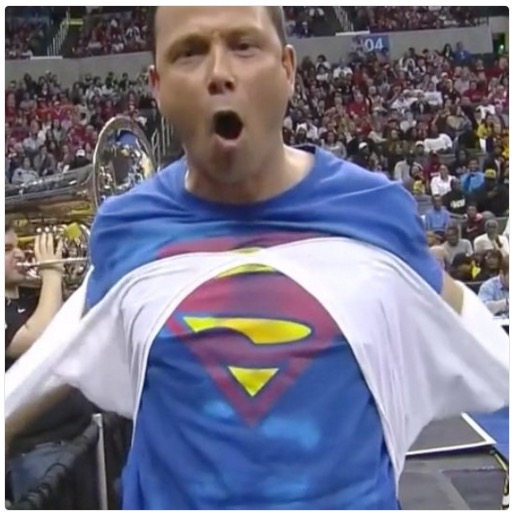 —Wichita State made Arizona’s coach sweat more than we knew was humanly possible.

—Northern Iowa! NORTHERN IOWA! In their first game, against Texas, it looked like they were going into overtime with only a few seconds left on the clock, when Paul Jesperson made the most stunning half-court shot I’ve ever seen.

—And then came Northern Iowa’s defeat, which was no less amazing. In the second round against Texas A&M, Northern Iowa was up by 12 points with 43 seconds left. Any expert would tell you that it was statistically impossible for A&M to come back from that large of a deficit in that amount of time. But the Aggies proved it was indeed possible, in what is maybe the most unbelievable minute of basketball I’ve ever watched. They went on to win in double overtime. The A&M kid who made the winning shot found out that his parents had left the game early!

…which made Bill Murray sad.

—St. Joe’s won its first game against Cincinnati by two points when Cincinnati’s final dunk was reviewed and it was determined that the player did not let go of the ball before the buzzer went off, meaning the shot didn’t count and St. Joe’s was victorious.

—St. Joe’s then fought valiantly against 1-seed Oregon and even had the lead with a few minutes to go, but ultimately lost by a few points in the last few seconds. (#THWND except when it collides with a duck?)

Just look at that beautiful bracket: 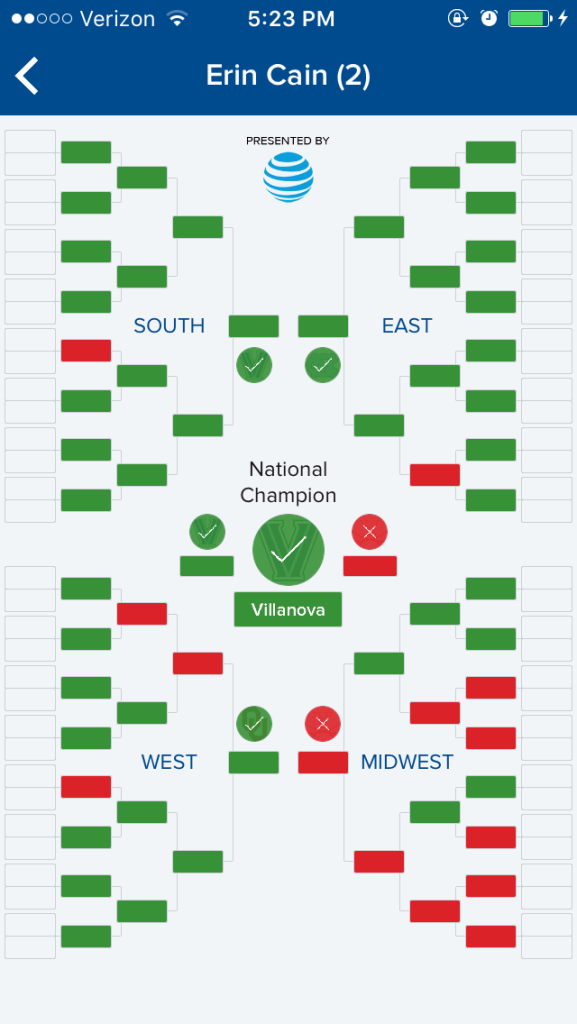 —And I’ve saved the best for last:

It was oh-so-sweet to see Villanova perform so well in this tournament. After they lost the Big East title, I wasn’t sure how they’d do, but they played flawless basketball at exactly the right time.

They cruised through their first three games and then had to take on #1 Kansas to compete for a spot in the Final Four. This game was a nailbiter, played on senior Nova star Ryan Arcidiacono’s birthday. Nova had a slight lead for most of the game, but Kansas was right on their heels. With less than ten seconds left, Arcidiacono knocked the ball out of Kansas’s hands to seal the win; watching the postgame celebration and knowing the Wildcats were headed to Houston made for an awesome night.

And once they got to Houston, Villanova exceeded expectations by defeating Oklahoma in a 95–51 blowout, the largest margin of victory in any Final Four game ever. I was both excited and nervous to watch the championship against UNC.

The championship game did not disappoint. It was definitely stressful to watch—and Villanova was down by 5 at halftime—but in some ways, the tense game made it that much more exciting. Nova made a huge comeback in the second half, surpassing UNC, and then, with only 4.7 seconds left, the Tar Heels tied it up. I was flipping out in my living room, telling myself this meant overtime and worrying that because UNC had the momentum they’d edge Villanova. But then Ryan Arcidiacono passed the ball to Kris Jenkins, and it was up in the air as the buzzer went off…

…and I screamed. Along with every other Villanova fan in the country.

The next day, still riding a high from that perfect finish, I enjoyed all the articles recapping the game. That shot…beautiful from every angle! And I loved the story of how Daniel Ochefu mopped the floor himself before the final play to make sure he wouldn’t slip.

Roxanne Chalifoux, the crying piccolo girl from last year, was there for Villanova’s redemption. There were some great reactions, too, from Charles Barkley and Michael Jordan. And coach Jay Wright didn’t even flinch!

I also would be remiss not to mention the story of Kris Jenkins and Nate Britt, who are adopted brothers. Britt played for UNC, and Jenkins made the winning shot for Villanova. Their story is really worth reading—it seems like the kind of thing that someone will make a sports movie about in ten years or so.

I can’t count the number of times I’ve watched this year’s One Shining Moment montage, both the regular version (which features ND’s tip-in!) and the Villanova version.

Yes, the song is super cheesy, but this year…it’s just so beautiful!

3 thoughts on “A March Madness to Remember”