Simon Peter said in reply,
“You are the Christ, the Son of the living God.”
Jesus said to him in reply, “Blessed are you, Simon son of Jonah.
For flesh and blood has not revealed this to you, but my heavenly Father.
And so I say to you, you are Peter,
and upon this rock I will build my Church,
and the gates of the netherworld shall not prevail against it.”
—Matthew 16:16–18 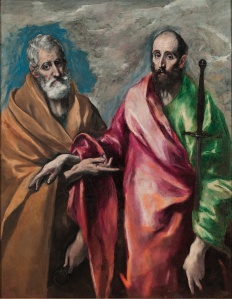 Considering the fact that they often disagreed in life, it’s funny that Peter and Paul now share a feast day. However, despite their differing personalities, their stories have much in common. Both Peter and Paul were beacons of the early Church, instrumental in evangelization and leadership. Both gave their lives as martyrs, sowing the seed of the Church. And both underwent radical conversions after personal encounters with Christ.

Peter’s story in the Gospels is one of constantly trying, failing, and persevering. He is somewhat of a hapless apostle, trying to please Jesus but constantly making mistakes in the process. His sincere love for Jesus is fully apparent, alongside his flawed humanity, and through this combination he models for us how to fall upon the great mercy of God. If someone like Peter can not only be forgiven for his denial and betrayal of Jesus but also be named the first pope—well, then there’s hope for all of us, isn’t there?

Paul has perhaps the most famous conversion story of all time, the dramatic encounter on the road to Damascus. He too is a prime example of a flawed saint; before Jesus dramatically intervened, Paul was literally murdering Christians. Not a typical path to holiness. But Jesus took even that unlikely path and redirected it toward sainthood. Paul always recognized that it was only through God’s grace that he was able to carry out his good works; he had no illusions of his own inherent goodness.

I, Paul, am already being poured out like a libation,
and the time of my departure is at hand.
I have competed well; I have finished the race;
I have kept the faith…
The Lord stood by me and gave me strength,
so that through me the proclamation might be completed
and all the Gentiles might hear it.
—2 Timothy 4:6–7, 17

Paul poured himself out until he was empty, an open vessel in which Christ could dwell. It was then that God’s grace worked in him most fully, supplying him with a transcendent strength to persevere in his mission. The words Jesus once spoke to Peter apply to Paul, too: “For flesh and blood has not revealed this to you, but my heavenly Father.” Peter and Paul both found their strength in weakness, by being receptive to divine revelation, allowing God to take control. Peter was particularly changed after receiving the Holy Spirit at Pentecost—before that moment, he was cowering in the upper room, but upon receiving those graces, he immediately stepped out in courage.

There is a lesser known story in which Jesus meets Peter out on the road and redirects his path. Instead of the road to Damascus, it is the road from Rome:

A legend has Peter walking along a road outside of Rome, fleeing arrest and certain death, when he comes to a crossroads: where the Appian Way meets the Via Ardeatina.

There he meets our risen Lord.

“Romam vado iterum crucifigi.” I am going to Rome to be crucified again….

The end of the story, of course, is the end of Peter. He turns around and heads back towards Vatican Hill. This is the last time he would need to be redirected by Jesus.

Imagine Peter at that crossroads. It would not be the first time he’d found himself in that position—his abiding love for Jesus pinned against his all-encompassing terror of suffering and death. Here was a second chance to choose faith over fear. Perhaps this time, Peter would recall the words he once spoke to Jesus: “Master, to whom shall we go? You alone have the words of everlasting life.”

Just as Peter and Paul persevered despite their flaws and sins and mistakes, may we too find the courage to get up when we fall and keep moving forward. May we recognize that it is far better to stumble along the right road than to speed down the wrong one—for even if the wrong one is smoother and easier, it won’t take us where we need to go, and there is only one Way that leads to everlasting life.